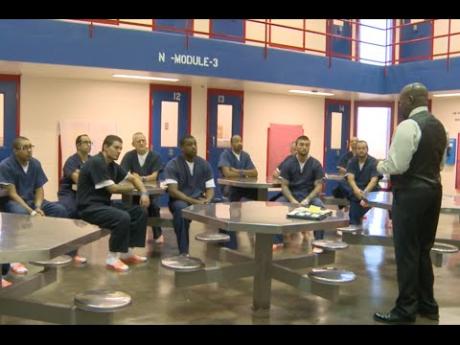 “He who has shed blood with me on the battlefield will forever be my brother.”

It’s not typical to see William Shakespeare prominently quoted on a jail unit wall. Nor is it typical to see the unit decorated  with military flags and artwork. But this unit is not typical. It’s a rehabilitation and treatment program for incarcerated veterans developed by the San Diego County Sheriff’s Department in conjunction with the U.S Veterans Administration and community partners.

The goal of the program is reduce recidivism among veterans – and  it’s working.

At any given time, San Diego County may have as many as 200 veterans in custody; many are dealing with substance abuse issues or post-traumatic stress disorder. San  Diego County staff wanted to focus on this often forgotten population. The Veterans Moving Forward program provides tailored in-custody treatment and services, links to community programs and re-entry assistance. All of the inmates leaving the program receive a re-entry plan, housing and other forms of support. And while inside, the inmates feel that the correctional officers, counselors and visiting instructors want  to see them succeed.

The veterans are housed together in a single unit within the jail. Since they are accustomed to living in a structured environment and following specific rules, Sheriff’s Department staff is able to tailor a specific program for them. The sense of brotherhood and camaraderie among this inmate  group is readily apparent.

The incarcerated  veterans take classes that will help them once they are released. These range from anger and stress management to personal finances to yoga. The program costs the county about the same as it does for inmates living in other units.

“They have a common goal of learning from each other, living a respectful life while in custody, taking the resources that are provided to them and really thinking about how they are going to change their lives,” explains Christine Brown-Taylor, re-entry services manager for the San Diego County Sheriff’s Department.

The program’s success is impressive. In the first year after it was opened in November 2013, 77 inmates in the program were released into the community – and only one returned on a new charge.

And for many of these veterans who have been in and out of jail since leaving the armed forces, this program is giving them hope for the first time. In talking with them, you can feel that they really believe that  this time they are going to make it on the outside.

“The first thing I was told was, ‘When you leave here, you are going to know where you are going. You are not going back to the streets,’ ” said one inmate. “That’s just a huge relief.”

“It’s not just idle time; it’s time to get to know yourself and your underlying  issue have been,” explained a third inmate, who has been in and out of jail numerous times before he entered this program. “It saved my life.”

Similar words are echoed again and again. The veteran inmates are aware they are being given a new opportunity – and the tools – to turn their lives around. They are learning where they have been – and more importantly, where they want to be. Too often our veterans are forgotten, especially when they are facing trouble – but not in San Diego County.

The program “gives you a sense of pride again,” we were told by an inmate as he looked around the unit. “You might have fallen from grace and messed up but … you have so much support here.”

This video and blog posting are part of a series of county best practices CSAC is featuring for National County Government Month. The programs being featured are 2015 recipients of CSAC Challenge Awards.