The numbers are staggering: $59 billion in deferred maintenance on state highways and $78 billion on local roads and streets. But what do those numbers mean to the average Californian who has to drive on those streets, highways, freeways and bridges every day?

To find out, the Alliance for Jobs communications staff took a Bad Roads road trip last week and visited communities in the Bay Area, Central Coast, Central Valley, San Diego and Southern California. We shot video and took pictures that document just how bad the roads are in many localities. The results in many cases are unconscionable in the world’s seventh-largest economy.

And don’t blame the local officials for these pockmarked, rim-crushing, alignment-destroying streets. Transportation funding has long been primarily a state responsibility and has been largely neglected since the last state gas tax increase was passed in the late 1980s.

As the Legislature’s special session conference committee holds a second hearing this week in Ontario, we hope lawmakers will take a look at these four examples of what 25 years of benign neglect have resulted in — and why the time is long overdue for action. 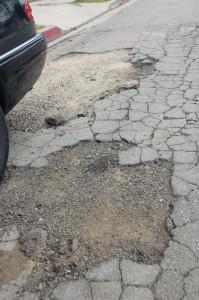 Lomita in L.A. County has a population of about 20,000. It is sandwiched between Torrance and the Palos Verdes Peninsula. The city lists one residential street, 248th street, as having a pavement condition index (PCI) of 2. That’s 2 out of 100. That means some portions of the asphalt have completely disappeared, as you can see from this stretch of pavement on 248th Street. You might expect to find pavement this bad in a developing country, but not in California, the seventh largest economy in the world. 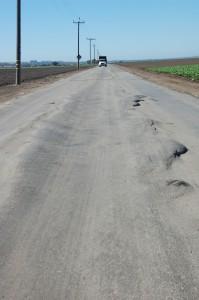 Foster Road near Salinas in Monterey County is frequently traveled by heavy produce trucks. It has to be one of the worst “paved roads” in the state. At the intersection with Highway 68, Foster Road,has been worn down by thousands of truck tires over the years which have cut deep ruts. The road has a PCI of 18. Helpfully, a sign warns cars turning off Highway 68 that there’s a rough road ahead. That’s an understatement! The ruts are especially bad in wet weather when water pools up instead of running off to the sides. 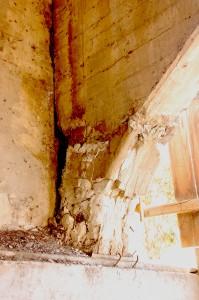 The historic Seventh Street Bridge in Modesto gracefully spans the Tuolumne River. Built in 1916, the 1,170-foot-long bridge is one of the few remaining cantilevered concrete arch bridges in the nation. With its carved lion’s heads and monuments flanking the roadway, it’s a great example of 20th century bridge architecture. Unfortunately, a look beneath clearly shows visible spalls, exposed steel where the concrete has sloughed off, water staining and alakali silica reaction. The bridge is unsafe for heavy vehicles. 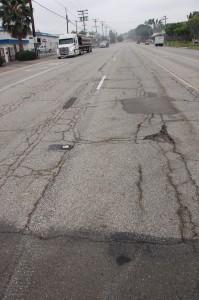 Temple Avenue in Long Beachis one of the routes to and from the ports of Long Beach and Los Angeles — combined, the busiest in the nation. Many streets in Long Beach are heavily traveled by trucks carrying goods from the ports to the rest of the nation. And since one fully-loaded semi can cause as much damage to roads as 9,000 cars, those streets need aggressive maintenance. Unfortunately, budgets can only go so far, as this stretch of Temple Avenue just south of the 405 Freeway clearly shows.

County Of The Week: Monterey

John Frith is the Communications Director for the California Alliance for Jobs.