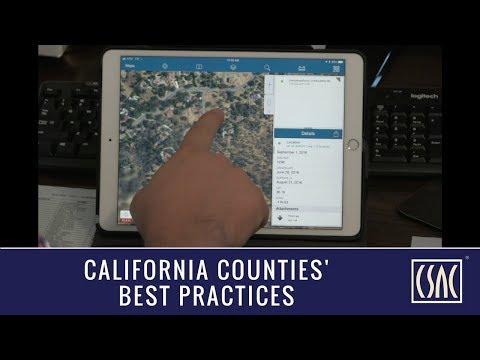 When we think of firefighting equipment, heavy hoses and axes quickly come to mind. In Tulare County, the Fire Department has added a new tool to its firefighting arsenal: a specialized app that provides valuable and necessary data to crews before they head out to a location, assisting them in saving lives and property.

It’s called the Foxtrot Fire App and it’s providing firefighters with a level of intel they previously did not have. Using the app, firefighters can quickly and accurately plan what equipment is needed to fight a blaze in a rural, mountainous area that may be unknown territory. And in a county that covers nearly 5,000 square miles – most of which is rural and covered by forest – that is crucial.

“We started brainstorming what we could do to better protect our mountain communities … and we wanted to use technology in that process,” said Tulare County Fire Department Battalion Chief Kevin Riggi, who works out of the East Porterville station. “So we brought in our IT Department in to see what we could do in pre-planning.”

That collaborative effort paid off as the County Fire Department now regularly uses the Foxtrot Fire App that provides critical geographical information firefighters previously did not have at their fingertips.

“Everything they needed us to do we could provide them,” said Matt Sanders, Client Specialist with Tulare County Information & Communications Technology. Many of the layers of GIS data the Fire Department needed were already in the county IT system. It was just a matter of putting them together in a comprehensive, user-friendly app.  Firefighters can now quickly view such valuable information as where structures are located; where there are potential water sources, such as storage tanks; the size and weight limits of rural roads and bridges. They can now ensure they are sending the right equipment to the right locations.

The application is a natural since battalion chiefs and engines carry ipads. And since the information can be pre-loaded, firefighters don’t have to worry about having cell service to access the data when in a mountainous area.  Firefighters can track their location on the app using GPS so they know where they at any given time.  And when they come across new data while out mapping an area, they just put it into the data base and it uploads to the server when they get back into cell range.

“We can capture more than just access roads. We can capture water tank storage for fire suppression, ambulatory potential, weight ratio of bridges,” explained Battalion Chief Riggi. “We can get that information, open up the app in the field and immediately see what is needed to protect a structure. Response time is greatly reduced with the software and pre-planning. It’s been such a great tool for us.”

Chief Riggi points to how useful the app was during the August 2017 Pier Fire that burned more than 36,000 acres, but only destroyed two structures. “I was able to have the information preloaded, look at it and know what I needed to do. It saved me hours of driving and assessing the community.”

Chris Ellorin, a fire captain at the Tulare County Fire Department’s California Hot Springs Station, helped test the pilot project out in the field and has trained others on the app.

“While my comfort in my area is really high, others responding to my area may not know what it’s like. Having this information for everybody in the field allows them to know what they are getting into equipment-wise. We can fine-tune things now,” said Captain Ellorin. “We need to know what equipment we can use. We don’t want to launch equipment that is over-sized and then get there with equipment we can’t use.”

Sanders says that “without a doubt” the app could be easily duplicated by counties around the state.

And the cost for this app was quite affordable. All it cost was less than a week of time to build. In fact, the app has saved the county about $12,000 since the Fire Department’s previous analog method of data collection was in need of a costly server upgrade. As for what the app has meant in terms of saving property and lives? Now that’s priceless.

This Tulare County program is a recipient of a 2017 CSAC Challenge Award, which spotlights the most innovative programs in county government. The Call for Entries for the 2018 awards will be released in April.