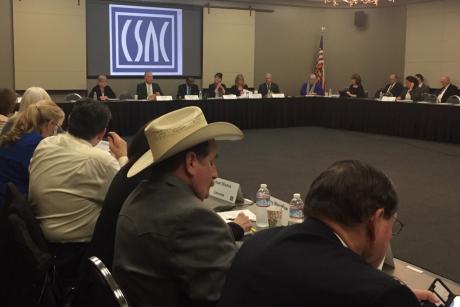 There is so much happening in the State Capitol and on the federal front as well that prioritizing issues is one of CSAC’s most important tasks for the year. Today the CSAC Board of Directors approved the Association’s 2017 Legislative priorities, setting a roadmap for CSAC to follow through the yearly state budget and legislative cycle. Two issues top the list: the In-Home Supportive Services (IHSS) cost-shift back to counties and passing a meaningful transportation funding bill. There are billions of dollars at stake in both issues.

“The IHSS cost shift will occur July 1 without further legislative action,” said CSAC Deputy Executive Director for Legislative Services DeAnn Baker. “But we’ve had some constructive meetings with the Governor and his staff on this issue and we are hopeful we can find a way to mitigate the impact to counties.” Without any further consideration by the Governor or the Department of Finance, this action will shift more than $500 million in costs back to counties in the first year, and that figure will climb significantly in the future.

CSAC’s meeting with the Governor and similar meetings recently with the Department of Finance indicate that a lot will depend on the next few months as the State continues to monitor revenue. We may not know much more until the May Budget Revision.

CSAC is also working with a coalition of stakeholders to pass a bill that provides meaningful new revenue to fix local streets, roads and bridges. There is more than $70 billion in deferred maintenance over the next 10 years for just the local need. Either SB 1 by Senator Jim Beall or AB 1 by Assembly Member Jim Frazier would allow counties to begin addressing this backlog. The bills also provide some streamlining that could deliver projects faster. CSAC is actively advocating for these bills and also is working to communicate the high level of local support.

These are just two of several dozen issues CSAC is prioritizing this year. We urge you to look at the 2017 Priorities to gain a better understanding of the wide variety of issues impacting counties.