CSAC Helps Kick Off “Stepping Up for Mental Health” Initiative 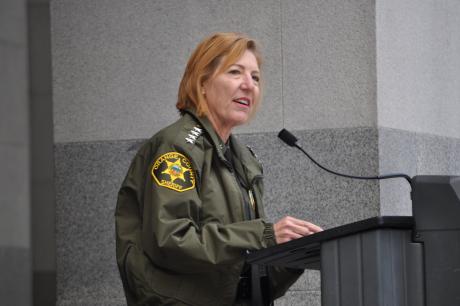 CSAC hosted a news conference on the steps of the State Capitol this week to help draw attention to the number of mentally ill inmates in county jails. It was one of several similar events held across the country this week to kick off the Stepping Up for Mental Illness initiative, sponsored by the National Association of Counties (NACo), the Council of State Governments Justice Center, and the American Psychiatric Association (APA.) The goal is to find ways to provide treatment and other alternatives for people with mental illness.

“The additional time and resources devoted to these individuals strain budgets and burden taxpayers while not doing enough to improve individual outcomes or public safety” said CSAC Executive Director Matt Cate. “Reducing the number of mentally ill in the criminal justice system by providing responsible alternatives can save money, reduce recidivism, improve public safety and provide better outcomes for the offenders.”

State Senator Robert Hertzberg spoke at the conference. He is carrying legislation to clarify that more types of programs are eligible for Mentally Ill Offender Crime Reduction (MIOCR) grants. Many California Counties have applied for these funds and the national Initiative is designed to spotlight programs like MIOCR grants. “Individual counties like many here in California have already been stepping up to reduce the number of people with mental illnesses in jails and providing effective, community-based treatment for people with these needs” said this year’s NACo President Riki Hokama, a Maui County Commissioner.
“By providing opportunities for counties and states to learn from each other’s successes and sharing tools and resources from the experts, Stepping Up is going to help county leaders from across the country to reduce these numbers.”

August 30, 2012
Back
This item appears in:
This csac bulletin article has been archived and may contain content that is out of date.
CSAC Bulletin Article
May 8, 2015