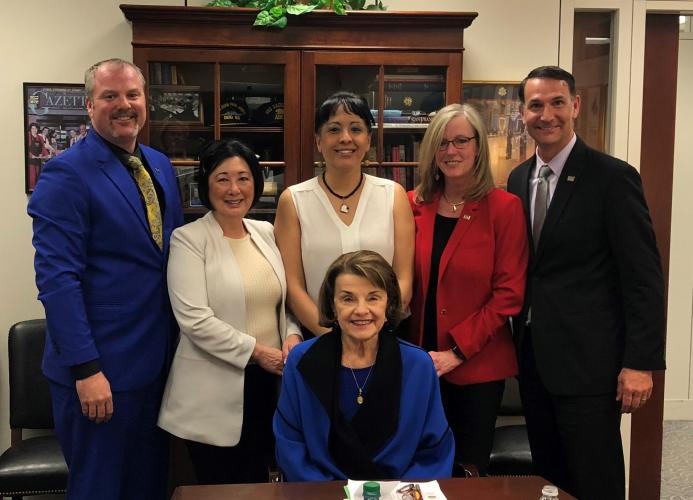 CSAC leaders, along with over 130 other California county officials, were in Washington, D.C. earlier this week for the National Association of Counties’ (NACo) Legislative Conference. The event is held on an annual basis and brings together over 2,000 elected and appointed officials from across the country to focus on key federal policy issues facing county government.

Representing CSAC on Capitol Hill was the full slate of elected officers, as well as several key members of the association’s staff. Led by Humboldt County Supervisor and CSAC President Virginia Bass, the contingent met with a number of members of Congress, including Senator Dianne Feinstein (D-CA). Additionally, the group met with the chair of the California Democratic Congressional Delegation, Representative Zoe Lofgren (D-CA), and Representative John Garamendi (D-CA), a senior member of the House Transportation & Infrastructure Committee. CSAC representatives also sat down with several key staffers to Senator Kamala Harris (D-CA).

While CSAC has a robust set of federal legislative priorities for the 2019 session, the association’s officers primarily focused on the following three issues in their congressional meetings: the homelessness crisis; disaster resiliency; and, infrastructure. As part of their messaging, association representatives emphasized the need for a strong federal-state-local partnership, while urging lawmakers to prioritize up-front investments in each program area.

In addition to their meetings on Capitol Hill, CSAC leaders met with senior members of the National Security Council’s Resilience team and the White House Office of Intergovernmental Affairs. The discussion centered on ways the Trump administration can engage directly with California’s counties and other local governments in order to improve community resilience. Additionally, the officers encouraged administration officials to work closely with county officials on implementation of the recently enacted Disaster Recovery Reform Act (PL 115-254), particularly as it relates to pre-disaster mitigation.

As part of this year’s conference agenda, CSAC hosted a congressional breakfast on Capitol Hill. The event featured presentations by the following members of the California delegation: Representatives Salud Carbajal, Julia Brownley, Scott Peters, Barbara Lee, and TJ Cox. The lawmakers spoke to county officials on a wide variety of issues, including the aforementioned CSAC priorities, cannabis policy, and the important role that county officials serve in influencing national policy discussions.

CSAC also hosted a very well-attended roundtable discussion on cannabis with county officials from across the country. CSAC staff provided the group with an update on pending federal legislation endorsed by the association – namely the STATES Act and the SAFE Banking Act – while Saphira Galoob of The Liaison Group provided an industry perspective. In addition, CSAC’s Cara Martinson was joined by Adam Crabtree of NCS Analytics to provide an update on California’s banking efforts before opening up the floor for a broader discussion.

County Of The Week: Yuba