Eight Honored for Service to Counties

CSAC and some of our affiliated organizations honored several people for their service to counties at our Annual Meeting in Late November. The list reads like a who’s who of individuals who know and live the value of county government.

CSAC honored five individuals for their Distinguished Service to California Counties – individuals who have made significant public policy contributions in support of our Counties. Each of the individuals listed below supported Senate Bill 1, the transportation funding package that will provide $5.2 billion per year to improve California’s highways, streets, roads, and bridges. 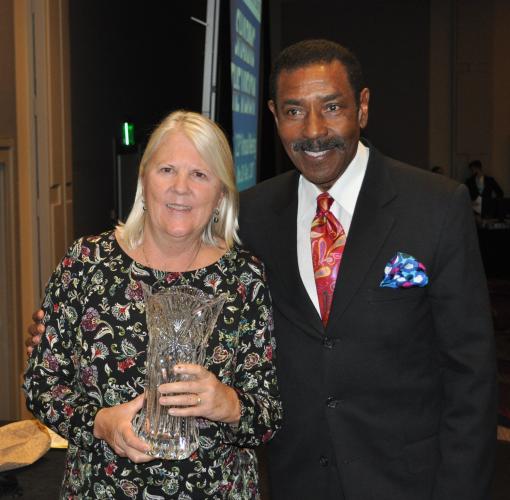 Our out-going President, Alameda County Supervisor Keith Carson presented the President’s Award to DeAnn Baker, CSAC Deputy Executive Director for Legislative Affairs, who is retiring at the end of January after a 30-year career with CSAC. DeAnn’s accomplishments during her employment at CSAC are far too numerous to list — but suffice it to say that there hasn’t been an important piece of legislation relative to Housing, Land Use and Transportation in the last 30 years that doesn’t have her imprint on it.

The CSAC Past Presidents Council presented its Life Time Achievement Award to former Assemblyman Rich Gordon, who served as CSAC President in 2008 when he was a San Mateo County Supervisor. He now leads the California Forestry Association. He was recognized for his history of bipartisan service to counties as a Supervisor and as a member of the Legislature.

And the California Association of County Executives (CACE) also presented its Distinguished Service Award to Mendocino County Chief Executive Officer Carmel Angelo. The award is given to a CAO/CEO who has “made a difference for the professional administration of county government.” Specifically, CEO Angelo was honored for her leadership on the regional regulation of cannabis, her work on public safety realignment, and for her dedication to her county in the wake of the devastating fires of early October and the ongoing recovery efforts.