Heroes are Where You Find Them!

Soon after it became clear how devastating the October Fires had been to communities in Sonoma and Mendocino, how many people had been displaced, and how great their needs were, many of us pitched in with donations of supplies, clothing, money and food. But not everybody knows how to actually turn donated food into a few thousand meals in a hurry. That’s where Humboldt County Supervisor Rex Bohn comes in.

He does know how to feed a crowd in a hurry, and he has the equipment to make it a little easier. In the first few hours after the evacuees started adding up in the counties to his south, he knew he had to do something to help his neighbors. Thus was born The Great Rex Bohn Barbeque. That’s our name, not his, and we had to pry some answers out of him about the experience. We think they’re worth sharing because not all heroes wear turnouts and carry a hose. Sometimes, they wear an apron and carry a spatula!

How did you first hear about the fires in the counties to the south of you in Humboldt? And, what made you decide to do something about it?

I started receiving phone calls from friends about the fire. Then I contacted Sonoma County Supervisors James Gore and Lynda Hopkins and asked if I could help. They said, “Head this way with food and we will have somewhere for you to go when you get here.” We brought 2000 Hamburger patties and 1800 hot dogs with buns and condiments, five pallets of water and a lot of energy bars.  One of our local grass-fed beef ranchers sent us another 500 pounds of hamburgers and another 400 pounds of hot dogs after we got there.  So helping out in any way was the right thing to do.  I made a few calls and pretty soon we had a plan, the funds and volunteers to get it done, all in 12 hours. 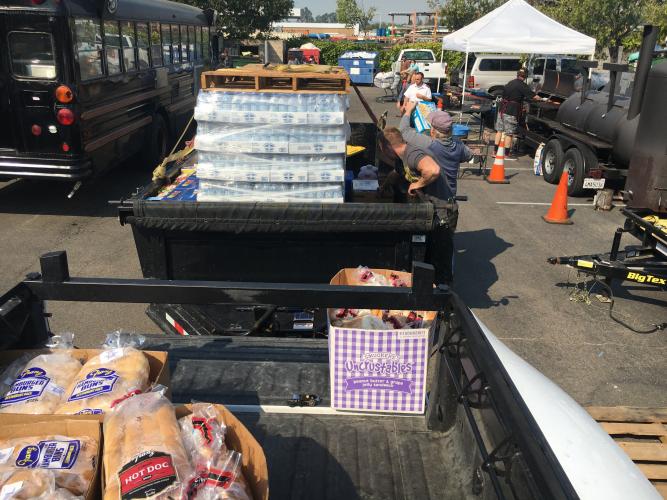 That’s what I do. I have (trailer-mounted) BBQ’s available. I don’t have a large oven I pull around to make casseroles.

So, you put together some funds on your own, but, you also got a lot of donations, how did that all happen?

Word of mouth to start, then social media kicked in and then volunteers just stepped up.  People want to help when there is a natural disaster.  This allowed them to be a part of it in a positive way.

Where were you feeding people and for how long?

For a day and a half, we were located at the Salvation Army Distribution Center at Stony Point Circle in Santa Rosa.  It’s a marvelous facility.  Once the professional services started showing up (caterers, local food prep, etc.) then I called Mendocino to see if they needed help.  We went to the Emergency Service Center on Low Gap Road at the request of Sheriff Tom Allman and cooked for a half of a day there.

What kind of reactions were you getting from people?

Even in dire times, everyone was thankful and appreciative. They were appreciative of strangers stepping up and doing the right thing. 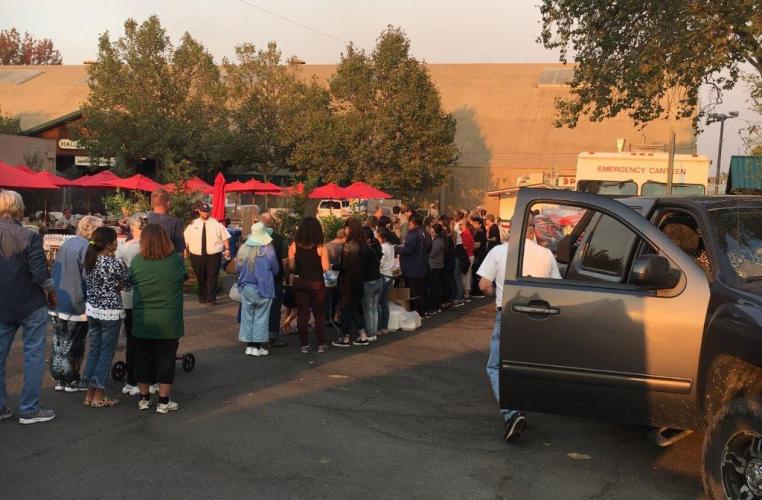 What memory sticks out in your mind the most about the experience?

The long line of people in Santa Rosa showing up at the Service Center who were bringing donations. Some of those people were evacuated from their own homes and were still showing up to help or donate because they felt others were in worse shape than themselves.  It was something to see. The selfless giving and connecting of people during such a crisis. I Wish there was more of that in our world.

Anything you want to add?

A special thanks to Jesse and Nicole Genaro, Dale DelGrande, Cody King and Chuck Petrusha for being with me right out of the gate.  They worked hard and helped make it possible.  And to everyone else who donated money, food, supplies too.  And lastly, to all the Humboldt folks who saw what was happening on social media and who came down to the sites to lend a hand where they could.  Proud moments.