LAO Report on Prop 13 Addresses Fiscalization of Land Use, Other Common Claims 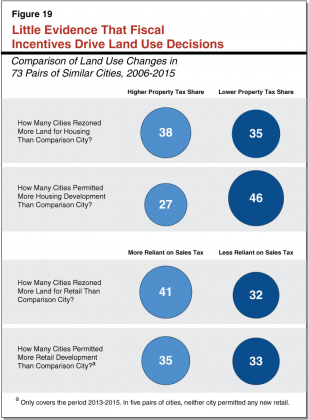 The Legislative Analyst’s Office (LAO) recently released a lengthy report, “Common Claims About Proposition 13,” aimed at answering major questions about California’s landmark property tax limitation measure. The questions are familiar to people with knowledge of California’s complicated state-local fiscal relationship, but the LAO’s report cast doubts on some conventional wisdom, including a concept central to the ongoing debate about how to address California’s shortage of housing.

Prop 13 was passed by California voters in 1978, and limits property taxes to 1 percent based on purchase price; it also increased the threshold for voter approval of special taxes levied by local governments to a two-thirds majority. The measure was a major change in government finance in California, and the effects are still being felt, analyzed, and addressed.

Perhaps the most provocative finding in the LAO report was that there is limited evidence for the so-called “fiscalization of land use.” This concept holds that after Prop 13, local governments have been more likely to favor development projects and zoning decisions that generate sales taxes or hotel taxes, often at the expense of housing development. To test this claim, the LAO analyzed pairs of cities similar in terms of incorporation date, population, and other characteristics, but which differed in their share of property tax revenues.

The LAO recognized that local jurisdictions analyze the fiscal impacts of development and found that commercial projects often yield greater fiscal benefits than residential. Despite these clear incentives, the analysis did not find evidence that cities receiving smaller shares of property tax revenue made significantly different zoning and permitting decisions than cities with higher shares.

The report did find that development impact fees for residential projects have increased significantly in recent years, representing an attempt to defray the costs of new residential development on local government services in light of limitations on property taxes. The LAO and others have previously identified California’s relatively high permit fees for housing as a contributing factor to California’s shortage of affordable housing.

In addition to these findings, the LAO addressed several complicated questions about the impacts of Prop 13—we’ve added very brief summaries of the LAO’s key conclusions below:


Q: Are Similar Property Owners Taxed Differently Under Proposition 13?
A: Yes; they can be significantly different.

Q: Do Proposition 13’s Benefits for Property Owners Vary with Income?
A: The value of benefits are roughly aligned with home wealth.

Q: Does Proposition 13 Reduce Property Turnover?
A: Property turnover has slowed, but other factors may also contribute to this trend.

Q: Did Proposition 13 Cause Residential Properties to Pay a Larger Share of Property Taxes?
A: The residential share is slightly larger, but it might not be caused by Proposition 13.

Q: How Does Proposition 13 Affect the Stability of Property Taxes?
A: Taxable property values are more stable under Prop 13, but property tax revenues are about as stable as they were before.

Q: How Did Proposition 13 Change Local Governments Mix of Tax Revenues?
A: Property tax is still the largest local revenue source, but sales taxes and other taxes represent a larger share than before.

Q: What Happened to Local Government Revenues After Proposition 13?
A: Local tax revenue per resident went down and California local government revenues per capita have increased more slowly than the national average.

Q: Did Proposition 13 Reduce the Number of New Local Governments Formed?
A: Prop 13 and other measures seem to have slowed local government formation.

Q: Does Proposition 13 Alter Property Owners’ Development Decisions?
A: Longer-term landowners are less likely to develop, but it’s unclear how much the trend is driven by Prop 13.

Q: Does Proposition 13 Increase Homeownership?
A: There is some evidence that homeownership rates have increased for older Californians, while decreasing the rates for younger residents.

Mark Neuburger is the CSAC Legislative Representative in the policy area of Housing, Land Use and Transportation.