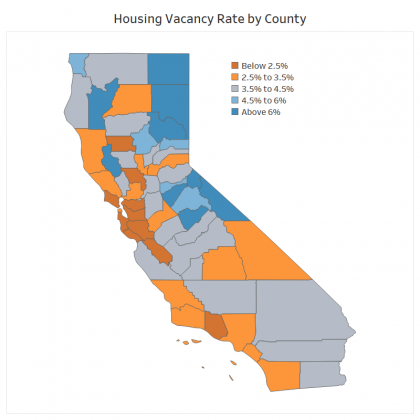 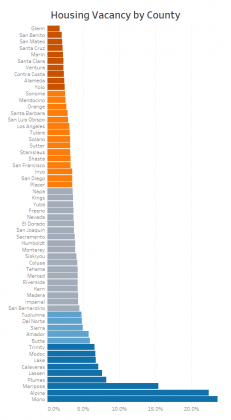 As California prepares for the sixth round of regional housing needs assessments, one burning question is whether the state will use housing vacancy rates as a factor. It sounds wonky, sure, but preliminary calculations indicate that a strict usage of the vacancy rate could cause some regional housing allocations to double or more.

State law allows the California Department of Housing and Community Development (HCD) to use vacancy rate as a modifier when calculating regional housing needs and a recent conversation with staff at the indicated they likely would, though it is not clear the extent to which they might factor it in.

Regardless of how they end up using it, the effects on the number of housing units counties and cities need to plan for would be significant, but would vary considerably from place to place.

As the graphics show, the highest concentration of low vacancy rates is in the Bay Area, with six of the nine counties in the planning area below 2.5 percent. The southern coast, from San Diego (3.5 percent vacancy) up through San Luis Obispo (2.9 percent), also all fall on the lower end of the scale.

Vacancy rate factors will be one of many areas for counties to monitor as preparations for the sixth planning cycle get underway.

Source: The data underlying the graphics comes from the U.S. Census Bureau, 2012-2016 American Community Survey 5-Year Estimates. Note that, based on conversations with HCD, seasonal, migrant worker, and other vacant units are not included in the calculation of a county’s vacancy rate.
Navigation Term Highlight