CSAC Honors Individuals for Their Contributions to Counties

Numerous state and county officials were honored by CSAC for their ongoing work during the Association’s 125th annual meeting in the city/county of San Francisco earlier this month.

“CSAC is privileged to honor a group of individuals who have shown ongoing leadership, passion and commitment to enhance the quality of life for residents in their communities and throughout the state,” said CSAC Executive Director Graham Knaus.

The following awards were presented at the recent CSAC Annual Meeting: 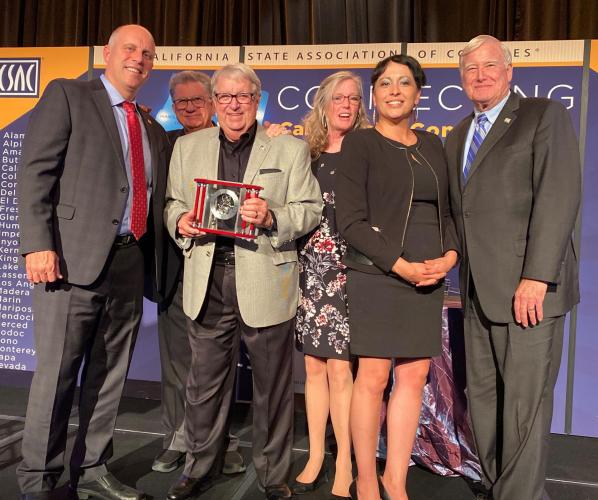 This year’s recipient, selected by CSAC Past Presidents, is retired Los Angeles County Supervisor Don Knabe, who devoted 30 years to serving the residents of his county as a staff member and elected official. Supervisor Knabe was first elected to the Board in 1996 and served  five terms until retirement. During that time, he was a key member of the CSAC Board of Directors and Executive Committee, helping set policy on a number of critical issues counties faced. 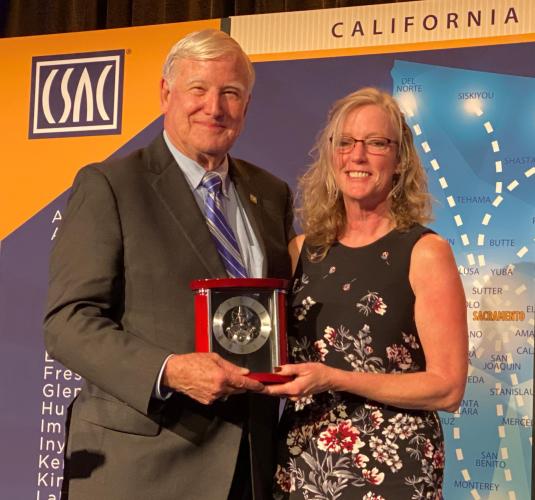 2019 CSAC President Virginia Bass selected San Diego County Supervisor Greg Cox to be the recipient of this year’s Award. Supervisor Cox has made significant contributions to CSAC over the years as a President, Officer, and longtime Executive Committee and Board of Directors Member. Beyond his service to CSAC, Supervisor Cox has served counties nationwide as a President of the National Association of Counties (NACo).

CSAC presents Distinguished Awards annually to individuals who have made significant public policy contributions in support of California Counties. This year, awards were presented to the following:

David Kilgore, Director of the State Department of Children Support Services – Director Kilgore has been a driving force in the increased funding provided to counties in the state budget for child support services. Under his leadership and partnership with counties, a revised funding formula was developed that resulted in $56 million in increased funding for fiscal year 2019-20.

Kip Lipper, Senate Energy & Utilities Policy Consultant – As Chief Policy Advisor on Energy and Environment to the Senate President Pro Tem, Mr. Lipper was instrumental in helping hold utilities accountable for wildfire damages by preventing changes to inverse condemnation — a top CSAC priority. Through work on AB 1054, he played a critical role in helping to prevent any changes to the state’s utility liability law.

Patrick McCallum, Up From the Ashes – Mr. McCallum has been a leading wildfire survivor voice and a key partner to CSAC in the fight to protect wildfire survivor rights and prevent changes to inverse condemnation. His efforts to coordinate and lead with other survivors and CSAC were critical in the passage of AB 1054.

Through its annual Circle of Service Awards, CSAC recognizes county officials, staff and other association-affiliated members whose service to our Association and our membership has been substantially above and beyond the norm.  County officials to receive the award in 2019 are:

Napa County Supervisor Alfredo Pedroza – Not only did Supervisor Pedroza chair CSAC’s Administration of Justice Policy Committee, but he also served an invaluable role as Chair for the Association’s Juvenile Hall Utilization Work Group. He led the group with efficiency and in partnership with the work group members, ensuring that all viewpoints were heard.

Napa County Supervisor Belia Ramos – Supervisor Ramos was integral to many actions related to CSAC’s advocacy in support of the Governor’s proposal to revise the County IHSS MOE and she served as co-chair of two instrumental working groups. CSAC’s work to get the Governor’s IHSS MOE proposal enacted into law and implement the new IHSS MOE significantly benefited from her contributions.

Shasta County Supervisor Leonard Moty – Supervisor Moty’s leadership as President of the CSAC Finance Corporation for the past two years has led to the development of many new programs that benefit all 58 California Counties and the nearly 40 million residents we serve. He has also played a strong leadership role on the CSAC Executive Committee and Board of Directors.

Mendocino County Chief Executive Officer Carmel Angelo – County Executive Angelo has played a critical leadership role on a number of statewide issues, including Public Safety Power Shutoffs, disaster preparedness, behavioral health and juvenile hall utilization. On all issues, she has been able to clearly outline impacts at the local level.

County Of The Week: Merced