Leading by Example State, County Officials Honored by CSAC for Their Work 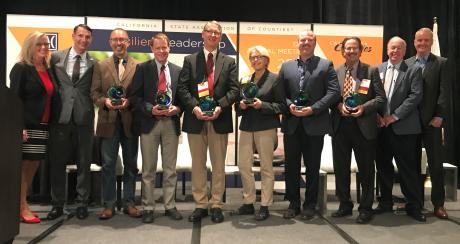 CSAC’s 124th Annual Meeting provided an important venue to recognize the hard work and collaboration of state leaders and county elected officials, staff, policy-makers and CSAC staff. For new supervisors, the annual awards program also serves as a benchmark for excellence and superior service to the organization. Since 2018 was a banner year for county advocacy and legislation, this year also meant a number of important recognitions.

The highest award, the 2018 CSAC President’s Award honored Diane Cummins, special advisor to Governor Jerry Brown, who has worked closely with CSAC on numerous significant issues over the past eight years. Previously, Diane served as the key Department of Finance staff person on the 1991 Realignment, the 1997 assumption of state trial court funding, and the 1997 welfare reform effort that resulted in the CalWORKs program. Diane also teaches one of the most popular classes at the CSAC Institute, Financing California Counties: The History, on county finances and the state/county fiscal relationship. New supervisors and staffers will be well served to sign up for her next class in Tulare in January or in Sacramento this March. Check out the upcoming Course Guide for more information.

As CSAC cannot work in isolation, the association relies on partnerships and coordination with elected officials and department leaders across the state.The Distinguished Service Awards recognize state officials who have worked hand-in-hand to help CSAC achieve its legislative priorities. This year’s honorees include:

CSAC’s Annual Circle of Service Awards provide recognition to county officials, staff and other CSAC members whose service to the county family, CSAC membership and CSAC goals are substantially above and beyond the norm. This year’s recipients fall into several distinct categories and include:

Finally, the Past Presidents Lifetime Achievement Award is a special recognition for a Supervisor, staff member or associate who made significant contributions to the association and County Family. This year’s award honors Sue Ronkowski for her 35 years of service to CSAC. Sue is enjoying her retirement with travel and rest.

The CSAC Officers, Board of Directors and staff congratulate all of this year’s winners and we thank you for your service to the County Family.

County Of The Week: Glenn