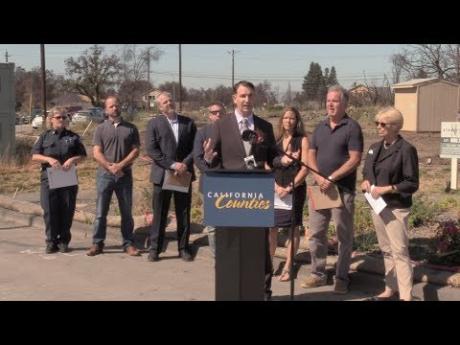 Wildfire survivors and California county supervisors came together Wednesday in Sonoma County to strongly oppose any potential changes to the state laws that govern how utility companies are held liable for fire damages caused by their operations.

Supervisors said that potential changes to the law – the subject of an upcoming special Committee of state legislators – could erase key constitutional liability protections for fire victims by making it easier for utilities to delay compensation decisions via lengthy and expensive legal action.

Changing these key utility liability laws – and especially those concerning a legal principle known as “inverse condemnation” – would also damage the ability for local governments, utilities and the state to partner in preventing future catastrophic fires, by reducing the incentive for utility companies to pursue fire-preventive operational or policy changes.

The press conference occurred on the property where wildfire survivor Brad Sherwood’s Santa Rosa home was destroyed by the Tubbs Fire last October – just one of thousands of residences to be devastated by wildfires across California during the past year.

“Keeping our key constitutional liability protections in place will compel utilities to invest in safety measures that help to safeguard our communities from future disasters,” Gore said. “We want to work together on measures that can help to save homes and lives – but changing the laws to suit utility companies is absolutely going to threaten those efforts.”

CSAC, along with a coalition comprised of local government associations, sent a letter to the Governor and legislative leaders this week expressing “collective concern about potential efforts to revise constitutional protections under the ‘inverse condemnation’ laws and long-standing liability statutes related to the causes of wildfires.”

Last week, Legislative leaders and the Brown Administration announced the convening of a Conference Committee to discuss potential changes to laws related to wildfire preparedness, response and wildfire liability. Wildfire survivors and local government officials across California have significant concerns about changes to key utility liability laws that could be considered in deliberations, and especially the “inverse condemnation” laws.

“We all need to work together on disaster planning, preparation and response – but our progress can’t come at the expense of these crucial liability protections for our residents,” Dillon said. “Weakening our constitutional protections actually takes away a crucial incentive for utility companies to help us prevent future disasters – and ultimately that means more lives and homes lost.”

Brown, who saw her community devastated by a wildfire last October, said: “As a small, rural county in Mendocino, we depend on inverse condemnation to hold utilities accountable. Without it, I worry that counties and communities like ours will simply be pushed aside by the large wealthy utility corporations. We want an opportunity to work out fair solutions as equals at the table, not as underdogs in court.”

Knaus also spoke about how the issue impacts counties of all sizes. “No matter when or where the fires happen, weakening liability laws is bad policy,” he said. “It lets private investor-owned utilities off the hook, while local governments and the citizens we serve are left holding the bag. We need to focus our energy on how we move forward together, to improve the safety of the communities we serve.”