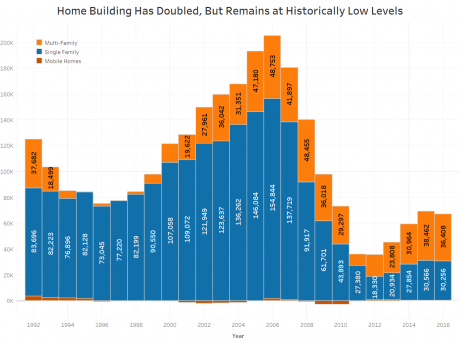 California added only 67,110 housing units in 2015 according to estimates from the Department of Finance and a new analysis from CSAC (interactive chart available online). While that number is nearly double the amount added during the depths of the housing bust in 2010 and 2011, it is still well below the number of units built every year before that for which estimates exist.

Home building peaked in 2005, when over 205,000 units were added to the market in California. Before the housing bust, the lowest year on record was 1995, during which just shy of 75,000 units were built.

As CSAC reported in October, the number of housing units per capita has plummeted in recent years. The low level of home building this new analysis shows will only exacerbate the problems caused by a housing shortage: high home prices, high rents, long commutes, and high levels of functional poverty and homelessness.

While there is significant debate surrounding the reasons why housing production has not kept pace with demand in California, there is broad recognition that a dwindling housing supply is a significant statewide problem. Promoting housing affordability, through measured regulatory relief, permanent state funding to subsidize the development of below-market-rate homes, and funding to update local land use plans so that they better accommodate infill development and align with state climate goals, will all be key priorities for CSAC in 2017.

CSAC’s work with the League of California Cities though our joint taskforce on homelessness has illustrated the urgency of addressing the affordability crisis, given the link between housing affordability and homelessness. Housing will also continue to be a high-priority issue for the Legislature in 2017. While it’s still very early in the legislative session, CSAC staff are already reviewing a significant number of bills that attempt to address California’s housing crunch.

To see the data for your county, download our spreadsheet of all county housing estimates from 1991 to 2016, sourced from the Department of Finance. Find other county-related data sets on CSAC’s DataPile.