Friday, November 5, is World Tsunami Awareness Day. Though tsunamis are less likely to occur than wildfires in California, they are still extremely deadly and 13 of our 58 Counties border the coast – meaning one-fifth of our Counties, maybe more, could be severely impacted if a tsunami occurred.

Did you know, the word “tsunami” comprises the Japanese words “tsu” (meaning harbour) and “nami” (meaning wave)? Tsunamis are a series of waves created by an underwater disturbance, usually associated with earthquakes occurring below or near the ocean. These rare events can be extremely deadly—in the past 100 years, 58 of them have claimed more than 260,000 lives, or an average of 4,600 per disaster, surpassing any other natural hazard.

In 2015, the UN General Assembly designated November 5 as World Tsunami Awareness Day. Ambassador Kimihiro Ishikane, Permanent Representative of Japan to the UN, described the significance of the date during last year’s observation.

Ambassador Ishikane explained, “this recent experience reminds us of the importance of raising public awareness of the risk posed by tsunami. It also teaches us the significance of international cooperation to mitigate its impact in all phases of prevention, preparedness, response, and recovery.”

Ambassador Ishikane continued that Japan will continue to share its expertise and lessons learned while continuing to work closely with countries in need to implement the Sendai Framework for Disaster Risk Reduction. The framework is equally applicable to Tsunamis as any natural disaster and calls for education, preparation, cooperation, and global partnerships for disaster recovery, risk reduction, and mitigation. Watch a video about the framework and efforts to promote tsunami awareness here. More on the history of World Tsunami Awareness Day is available in this recent column in the Eureka Times-Standard. 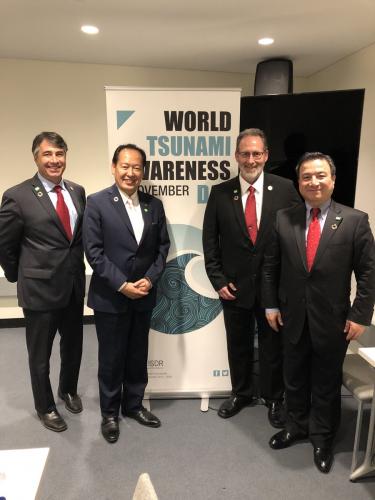 There are many allies and resources available to help educate and prepare counties, communities, and citizens about tsunamis and their impact. As Ambassador Ishikane mentioned, public awareness is key in mitigating the impacts of a tsunami.

Another statewide tsunami preparedness effort is a partnership between the Redwood Coast Tsunami Work Group and the California Seismic Safety Commission to develop K-12 tsunami safety curriculum tied to the book The Extraordinary Voyage of Kamome, a Tsunami Boat Comes Home, which is now available in eight languages, all available for download at https://digitalcommons.humboldt.edu/monographs/1/, and most available in print form through Amazon.

An animated version of the story is available in English, Japanese, and Spanish on the Kamome and RCTWG websites. Some of the lessons are aligned with the Great California ShakeOut in October, and others can be used as stand-alone lessons about culture, folktales, and other stories of children who have alerted locals to tsunami dangers around the globe. Several thousand educators have already accessed the Kamome-inspired curriculum (available in English, only) here. 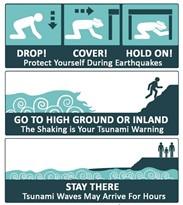 Other educational efforts inspired by and developed following the Kamome discovery include the development of regional tsunami safety brochures, a preparedness triad available in 13 different languages and a magazine called Living on Shaky Ground.

As World Tsunami Awareness Day is observed on Friday, we invite you to review these resources, maps, and curriculum. They are one more way that the Sister City/County relationship between Rikuzentakata and Crescent City/Del Norte County continues to positively impact safety and awareness both locally and globally.