The Governor’s May Revision included changes to that original expenditure plan that included an additional $26.8 million to CAL FIRE to fund 6 year-round prescribed burn teams to tackle more fuel reduction projects statewide and an additional $20 million to the Natural Resources Agency to provide block grants that support the implementation of regional landscape-level forest restoration projects that leverage non-state funds. This funding is in addition to $160 million for Healthy and Resilient Forest programs and $25 million to help fund local fire response which were both proposed in January.

CSAC has three major requests in changes to this year’s proposed Cap & Trade Expenditure Plan that include:

$100 million for the Transformative Climate Communities (TCC) Program. TCC delivers multiple emission-reducing strategies in a coordinated way that can transform local communities into models of economic and environmental sustainability. (LINK TO CSAC LETTER)

$100 million for expanding California’s Mutual Aid System. This request is supported by state and local fire chiefs and local government advocates to help with pre-positioning of fire trucks and to upgrade emergency communications and resource dispatch capabilities.

The Senate Budget Committee has proposed several changes to the Governor’s proposed Cap & Trade expenditure plan. These changes include an increase in funding to Cal FIRE for forest health and fire prevention programs to a total of $250 million and a decrease in funding to OES for local fire suppression grants from $25 million to $10 million. 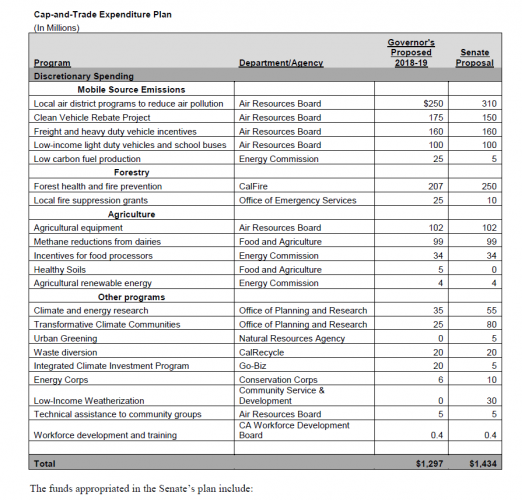 The Senate proposal made no changes to the proposed $20 million to Cal Recycle to implement effective greenhouse gas reduction efforts through waste management.  In addition, the Senate has also proposed to increase funding for the TCC program from $25 million to $80 million. This TCC allocation is much closer to CSAC’s request for increased funding for this program.

The Assembly Budget Committee Cap & Trade Expenditure proposal has left the Governor’s original proposals mostly unmodified in the areas of fire response and funding for the TCC. However, the Assembly does propose increasing funding to waste diversion programs at Cal Recycle from $20 to $40 million. This increased allocation is appreciated by CSAC, however it still falls far short of the allocation needed to help meet the state’s coming organic waste diversion regulations.

Both of the proposed plans will head to a Budget Conference Committee where the final details and differences will be worked out between both houses of the Legislature. It is expected that a final Cap & Trade Expenditure Plan will not be finalized and voted on until the end of the legislative session.

Nick Cronenwett is the Legislative Analyst for the Agriculture, Environment and Natural Resources Policy Area.