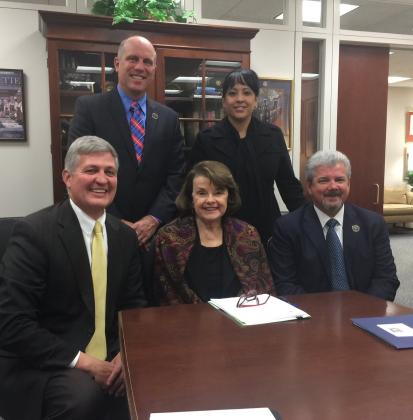 CSAC leaders, along with dozens of other California county officials, were in Washington, D.C. this past week for the National Association of Counties’ (NACo) Legislative Conference.  The event is held on an annual basis and brings over 2,000 elected and appointed officials from across the country to focus on key federal policy issues facing county government.

During their time in the nation’s capital, CSAC officers and staff met with key members of Congress to discuss the association’s federal legislative priorities for 2016.  Led by Amador County Supervisor and CSAC President Richard Forster, the association covered a variety of topics, including Indian fee-to-trust reform, funding for the Payments-in-Lieu-of-Taxes (PILT) program, extending the Secure Rural Schools (SRS) program, and child welfare reform.

For the tenth year running, CSAC hosted its annual congressional breakfast on Capitol Hill.  The popular event featured presentations by the following members of the state’s congressional delegation: Representatives Jeff Denham (R-CA), Doug LaMalfa (R-CA), Zoe Lofgren (D-CA), and Jared Huffman (D-CA).  The California lawmakers spoke to county officials on a variety of issues, including the aforementioned CSAC priorities, the ongoing drought, and access to reliable broadband in rural areas.

In addition, and among others, CSAC officers met with Senator Dianne Feinstein (D-CA) to discuss the association’s priorities.  Off of Capitol Hill, CSAC leaders sat down with representatives at the U.S. Forest Service to further coordinate state and federal efforts to address the tree mortality crisis in California.

County Of The Week: Amador