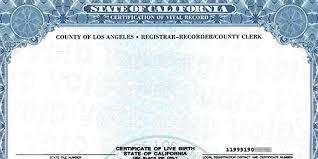 Governor Jerry Brown signed AB 1546 into law last week and it takes effect immediately. The bill, authored by Assembly Member Kristin Olsen, will bring California’s vital records into the 21st century and ensure that the state’s residents can receive their most precious documents; birth certificates and the like, without undue delays.

California Health and Safety Code provides authority to the local registrars and county recorders to provide a copy of a birth, death, marriage or marriage dissolution record to an applicant. Stringent requirements exist for the printing of certified copies of these records, including that they must be printed on chemically sensitized security paper that measures 8 1/2 inches by 11 inches and contain several security features, including watermark, prismatic printing, fluorescent fibers and “intaglio print,” which is a type of textured, raised engraving made into the paper.

While most states have similar security measures, California is only one of two states which, in addition to the above measures, require the specific intaglio printing. In early 2015, due to mergers and acquisitions of various bank note companies nationwide, only one company (Sekuworks) in the nation met the security requirements of California − specifically intaglio printing − and was the company that provided bank note paper to all 58 California counties.

In July 2015, Sekuworks abruptly and permanently closed and counties, as well as the state, were left with declining amounts of secure paper for vital records and limited options for purchasing more. Many counties were forced to drastically ration their provisions of vital records to applicants and others depleted their supply of the special security paper and referred applicants to the State Department of Public Health (DPH).

Recognizing the time-sensitive need for a long-term approach to ensuring that counties are prepared to serve residents’ needs for vital records with an adequate inventory of secure bank note paper, CSAC partnered with the County Recorders Association of California (CRAC) to sponsor AB 1546. The bill, as signed, allows DPH to suspend the use of security features of a certified copy of a birth, death, or marriage record at times when it is necessary to avoid shortages in the paper on which such records are printed.

CSAC thanks Assembly Member Olsen and CRAC for their partnership in ensuring such a catastrophic shortage of vital records paper doesn’t disrupt the operations of counties or our 38 million residents again.