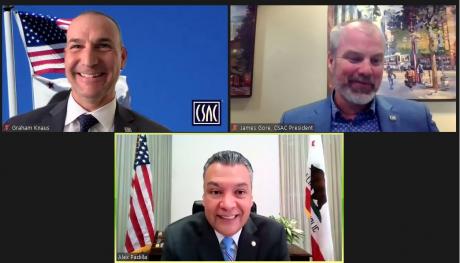 One of the highlights of CSAC’s Virtual Legislative Conference this week was a general session conversation with featured guest U.S. Senator Alex Padilla. He addressed the membership and entertained a few questions from CSAC President and Sonoma County Supervisor James Gore and CSAC Executive Director Graham Knaus.

Broadband, one of CSAC’s top advocacy priorities, was a topic covered both in Senator Padilla’s address and the conversation with President Gore and Graham Knaus. The Senator shared his belief that the state “is uniquely positioned to leverage federal funding, along with state and local dollars, to extend the broadband network” to underserved areas of the state.

“One of the key questions being debated in Washington now,” he shared, “is how broadly or how narrowly to define infrastructure.” In terms of broadband, Senator Padilla shared that it is the one non-traditional category of infrastructure that is receiving bipartisan support. The importance of broadband for distance education and telemedicine during the pandemic has elevated the urgency of this issue in Washington. With two school-aged children at home, Senator Padilla shared how personal the broadband issue has become for him and that he plans to work hard to ensure California sees progress in this area.

Senator Padilla shared that in addition to being appointed to the Homeland Security and Judicial Committees, he is Chair of the Judicial Subcommittee on Immigration, Naturalization and Border Security. When asked about immigration reform, Senator Padilla expressed his optimism once again for progress and President Biden’s commitment to sign an agreement brought forward. He referenced bipartisan support for protecting ‘Dreamers’ and farmworkers, as well as developing a pathway and process for those essential works in agriculture, nursing, trucking and other industries so critical during the COVID-19 pandemic. He looks forward to seeing “what the art of the possible looks like as we get some clarity in the crystal ball.”

Expressing profound appreciation for the service and commitment of counties in addressing the COVID-19 pandemic, Senator Padilla recognized that “counties have literally been on the front lines” protecting public health. He also referenced the extraordinary work of County Clerks and Registrars of Voters during a historic election year. In closing the session for CSAC, Senator Padilla invited CSAC Officers and representatives to meet with him during their upcoming visit to Washington, D.C. for the National Association of Counties meeting. So while the former California Secretary of State may not have served as a county supervisor himself, we have a true local government advocate working on our behalf in Washington, D.C.