In a previous installment in this series, we found that property taxes per capita have declined in 86% of counties since their pre-recession peak, after adjusting for inflation. This is alarming, since property taxes are the main source of discretionary funds for most counties.

But what about other tax revenues? The sales tax has bounced back. Hotel taxes should be higher with increased tourism. And while counties have no authority to increase property tax rates, they can ask voters to approve increases to other taxes if they face shortfalls. Redevelopment dissolution should also have provided counties with new funds that, for legal reasons, are not yet considered property taxes.

If we consider all tax revenues together, how are counties doing? 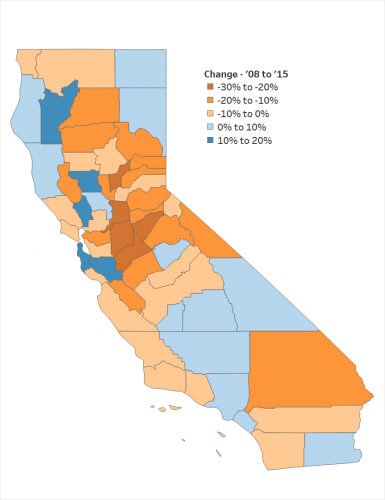 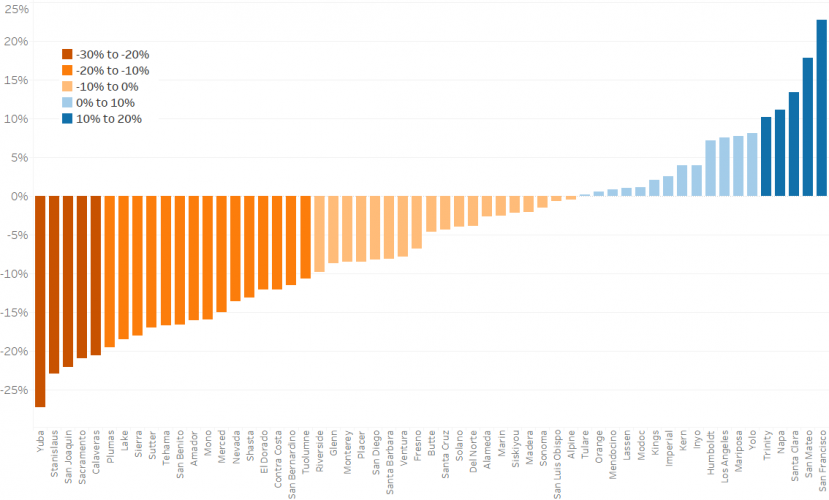 The answer, as shown in the charts is troubling.

Even with all these other sources added in, two-thirds of counties—39 out of 58—receive less revenue per capita than they did at their pre-recession peaks, after adjusting for inflation.

Meanwhile, the state, which relies on a different mix of taxes than counties do, has enjoyed a 20.8 percent increase in its funding level over a comparable period.

As with property taxes, the decline in total taxing power is widespread, cutting across designations of urban, rural, and suburban. However, the effects are most pronounced in the northern Central Valley, foothills, and some of the areas north of Sacramento. Yuba County has been the hardest hit.

The implications of this uneven recovery are many, but one is that counties are not in a position to bear further cost-shifting and program responsibility from the state.

As the statewide economy has improved, it has done so in ways that particularly benefit state-level revenues, leaving two-thirds of counties behind and many others only treading water.